Vote From Home 2020 surveyed more than 3,000 likely Democratic swing-state voters to understand their beliefs and intentions around mail voting in the 2020 election, and then followed up with more than 850 respondents to learn how their answers had changed over the past month. The top-line survey results, presented below, provide critical insight into how an important subset of likely Democratic voters—those who live in swing states and have a track record of voting, but who have not yet requested a mail ballot—are thinking about voting by mail in this unprecedented election cycle, and how their beliefs and behaviors are shifting as we approach November 3.

A total of 531,369 people in Michigan, North Carolina, and Pennsylvania were originally initially invited to participate in an online survey (“Wave 1”). All contacted individuals were registered voters over the age of 18 who are likely Democrats. Each of these voters had a track record of voting in recent past elections but had never voted by mail before and who, as of September 1, were not listed in state voting records as having applied for a mail-in ballot for the 2020 election.

A total of 3,417 individuals took the survey between September 2 and September 6, 2020, with n = 2,725 individuals completing all survey questions. This final sample of individuals was not randomly selected and does not represent the broader population of swing-state or national Democratic voters. However, the survey responses still provide useful insight into how an important subset of likely Democratic voters are thinking about mail voting in the context of the 2020 election.

Vote From Home 2020 followed up with all 3,417 respondents between October 7 and October 10, 2020, to see how their responses had changed over the past month. A total of 852 people took this follow-up internet survey (“Wave 2”).

Vote From Home 2020 conducted a randomized controlled trial to measure the impact of its voter outreach programs. In the first survey wave in September, respondents were asked how easy it is to vote by mail. Respondents were then randomly placed into a treatment group or a control group, with the treatment group receiving ongoing contact from Vote From Home 2020 and the control group being suppressed from any future contact. (An additional control group was randomly selected from those who did not respond to the survey.)

In October, the same survey respondents were again asked about the easiness of voting by mail. Individuals who remained in Vote From Home 2020’s outreach program were 6 percentage points more likely to say voting by mail is easy, compared to individuals assigned to the no-contact group.

After the November election is completed, turnout rates will be compared for those voters who were contacted by Vote From Home 2020 and those who were not. Results from that component of the RCT will be shared as soon as data is available.

Plans to vote by mail

Respondents who said they intend to vote in the 2020 election were asked how likely they are to “vote at home using a ballot that was mailed to you” (hereafter “vote by mail”), as opposed to voting in person. The majority of nearly every age and racial/ethnic group say that they plan to vote by mail (Figures 1 and 2). The one exception is individuals who report belonging to another racial or ethnic group than the ones asked about on the survey. 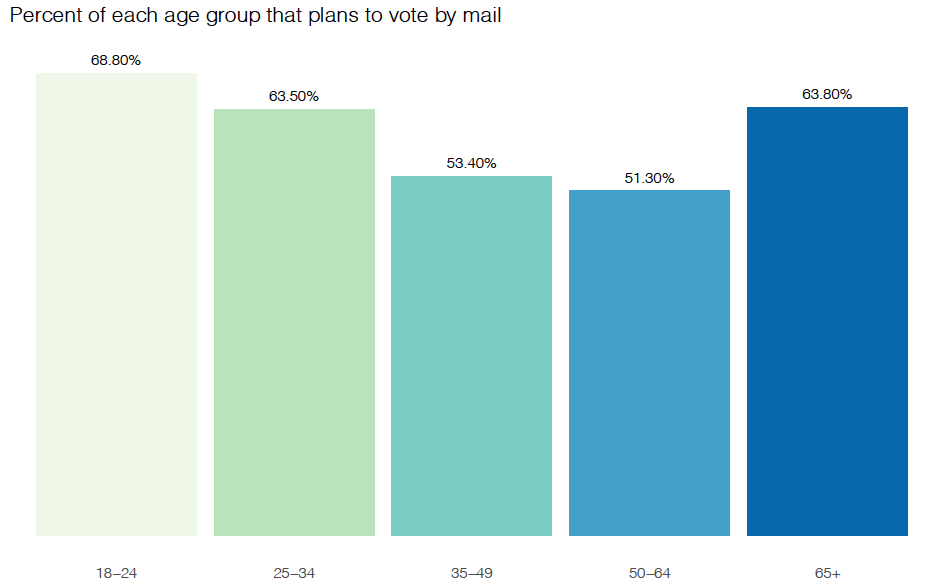 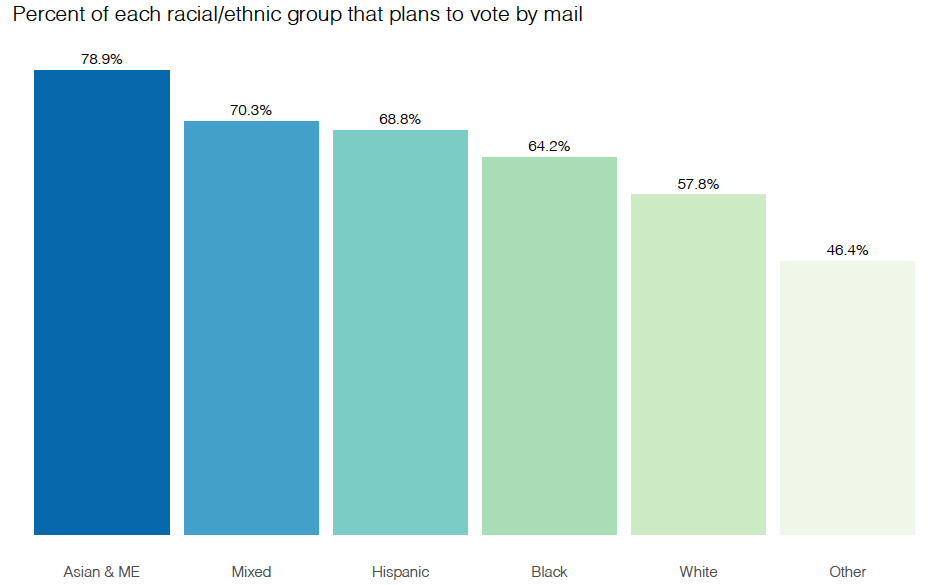 Reasons for not voting by mail

Respondents who said they planned to vote in person were asked why they do not plan to vote by mail. As shown in Figure 3, younger respondents are more likely to cite concerns about vote security and the vote-by-mail process, whereas older respondents disproportionately cite wanting to exercise their right to vote in person. Among respondents, young people ages 18-34 are 12 percentage points more likely than those 35+ to cite concerns about the vote-by-mail process, USPS, and/or vote-by-mail security as a reason for not voting by mail, a statistically significant difference (p < 0.05). 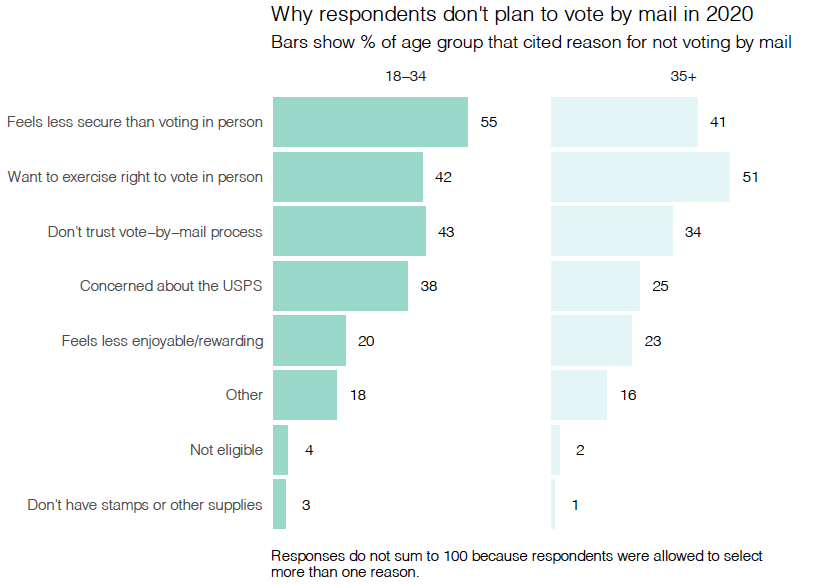 Both white respondents and people of color cite similar reasons for not voting by mail (Figure 4). While white respondents are somewhat more likely to cite a concern with the vote-by-mail process, with voting security, or with the USPS, this difference is not statistically significant. 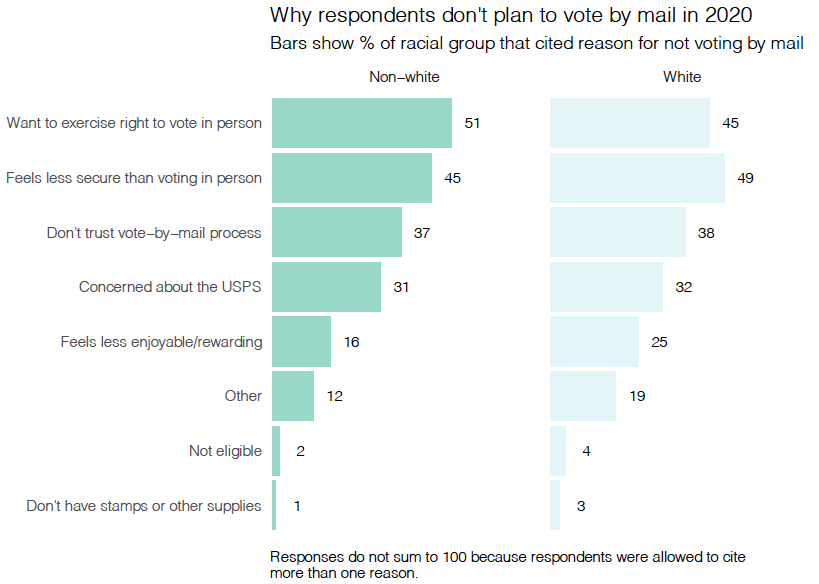 Applying to vote by mail

Who has already applied?

Of the 61% of respondents who plan to vote by mail, a full 84% say they have already submitted a mail-ballot application. Individuals who participated in both survey waves were 26 percentage points more likely in October than in September to say they have applied (p < 0.0001). Application rates are fairly steady across age groups but vary meaningfully by race (Figure 5). For example, only 75% of Hispanic respondents say they have already applied, compared to 89 percent of Asian and/or Middle Eastern respondents. 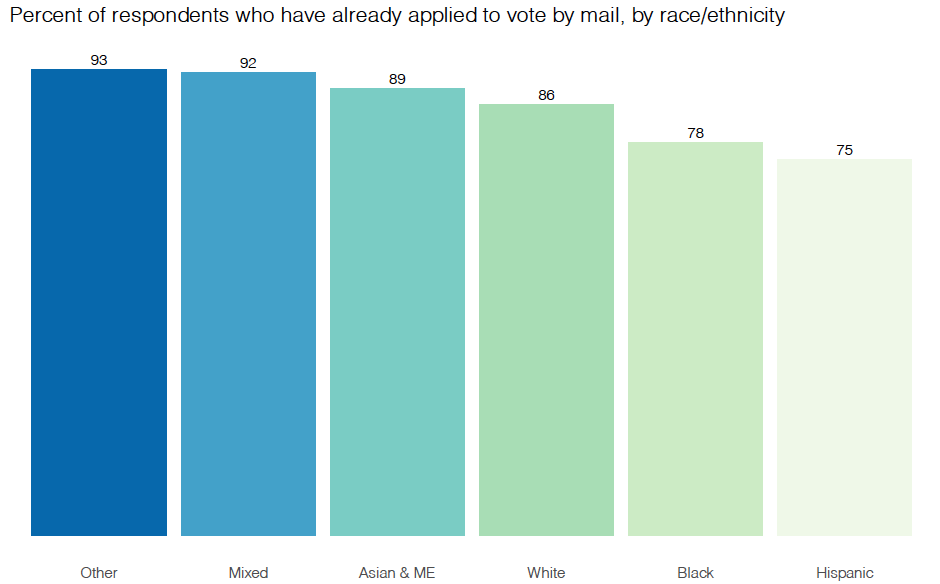 Interestingly, among the 39% of respondents who do not currently plan to vote by mail, around 10% have applied for a mail ballot at some point in the election cycle. Application rates are similar for young (18-34) and older (35+) voters. Respondents of color are 4.3% more likely to have applied in the past than white respondents (Figure 6), though this difference is not statistically significant. 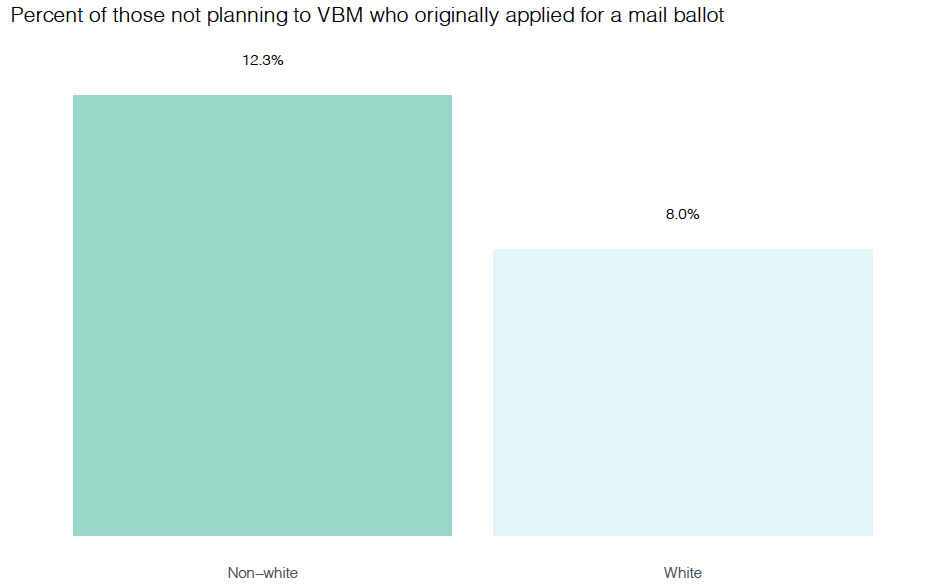 Why haven’t people applied yet?

Those respondents who plan to vote by mail but have not yet submitted a VBM application were asked for their reasons. While both young and old people are especially likely to offer “other” reasons beyond those provided in the survey text, young people are also particularly likely to say that their state is mailing them a ballot, while older respondents disproportionately say they have not gotten around to applying (Figure 7). This is potentially concerning, as every survey respondent is currently registered to vote in a state that is not proactively sending voters mail-ballots.

Turning to race, the plurality of white and non-white respondents again provide “other” reasons for not applying (Figure 8. However, white respondents are also particularly likely to say their state is mailing them a ballot. People of color, in contrast, are much more likely to cite informational barriers: not knowing where or how to apply, and not knowing they had to apply. 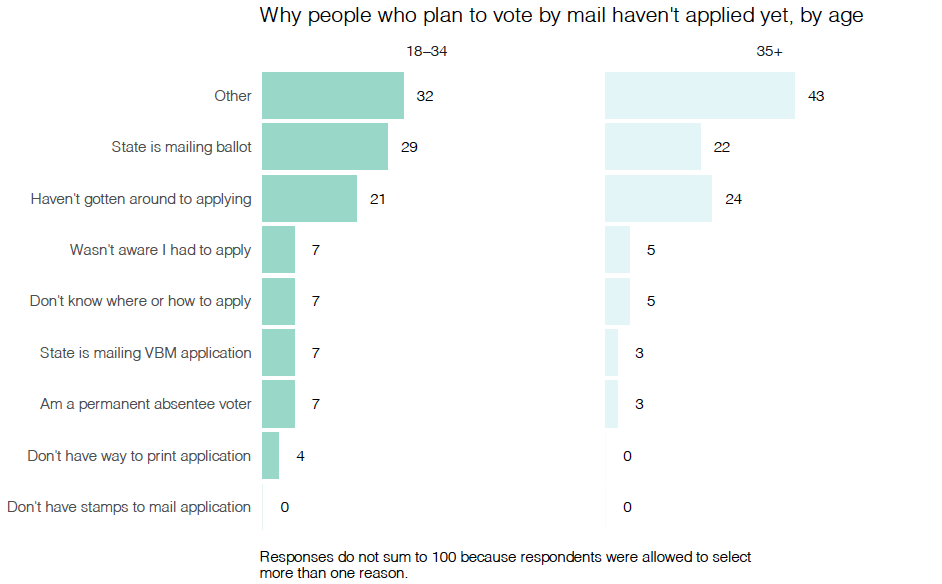 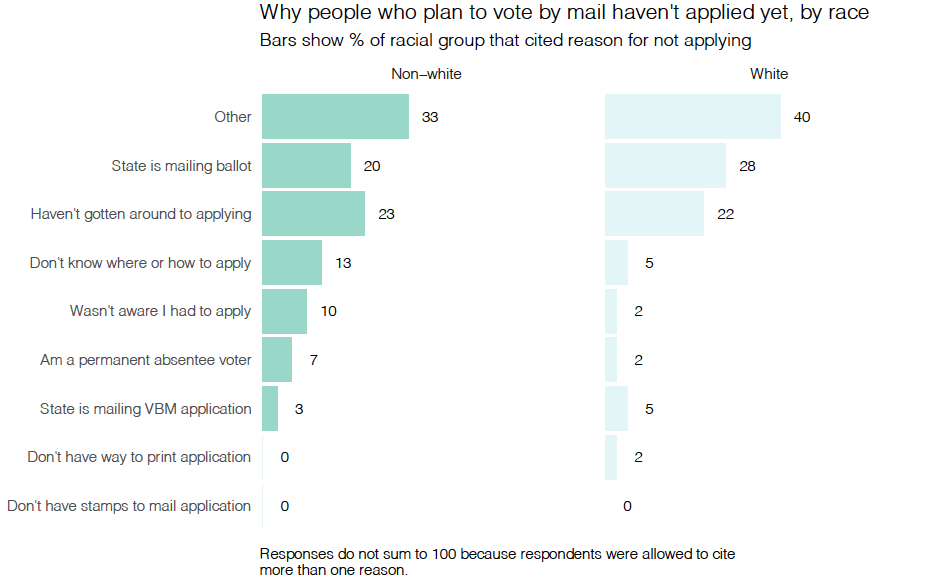 Respondents were also asked whether they had been contacted by their local election administration about voting by mail. A full 69% reported having been contacted. An additional 13.5% are unsure, and 17.5% say they have not been contacted. These results are similar for both white and non-white respondents.

However, as shown in Figure 9, there are variations by age. 64% of younger respondents ages 18-34 report having been contacted by their local election administration, compared to 74% of those 35 and older—a 10 percentage-point difference.

Election administrators also appear to have ramped up their voter outreach over the past month. Respondents who took both surveys are 25 percentage points more likely to say that they’ve been contacted by their election administration about voting by mail, compared to in September (p < 0.0001). 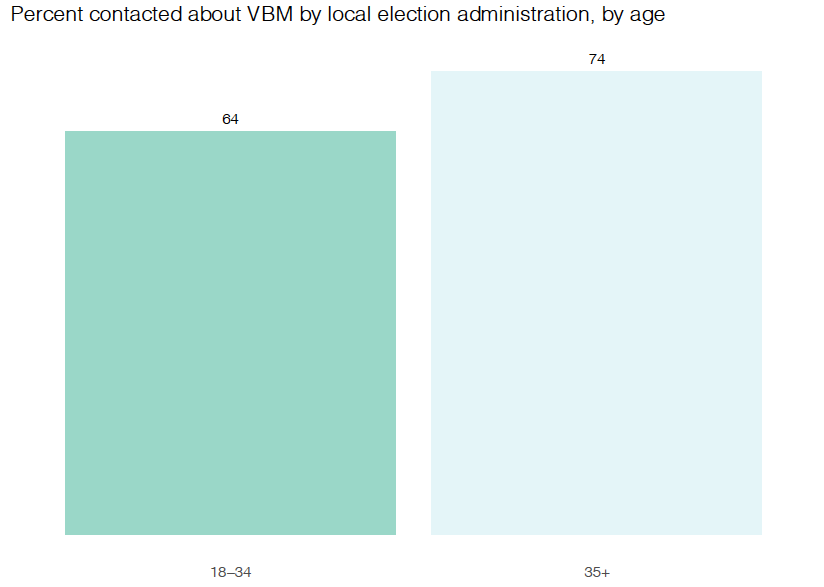 Survey respondents were asked a series of factual questions about their state’s policies around mail voting.

Respondents were next asked whether their state has a signature-matching policy, in which voters must sign using a signature that matches the one on file with their elections office. Just over half of respondents (51%) correctly answered this question. Knowledge levels did not vary meaningfully by age. However, white respondents were 11 percentage points more likely to answer this question correctly than respondents of color (Figure 10), a statistically significant difference (p < 0.001). Notably, respondents who took both survey waves were significantly more likely to know in October whether their state requires a voter’s mail-ballot signature to match a signature on file, compared to in September (+14 percentage points, p < 0.0001). 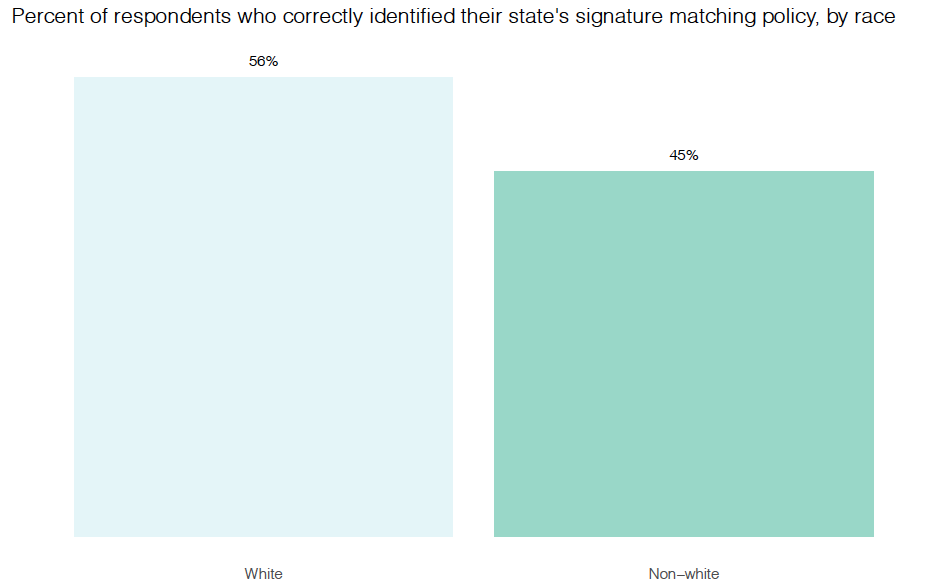 The driving factor behind this difference appears to be relatively low knowledge of signature-matching policies among Black survey-takers. 56% of white respondents know their state’s policy, compared to just 44% of Black respondents (Figure 11). This difference is again statistically significant (p < 0.05). 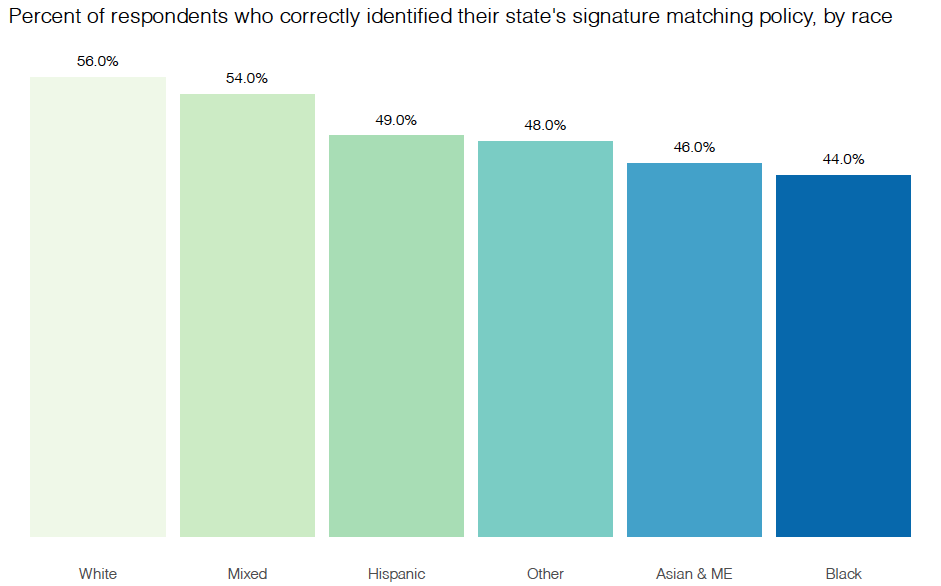 Survey-takers were next asked whether their state allows mail ballots to be dropped off in secure drop boxes. Around 60% of respondents correctly answered this question. Both young and older respondents showed similar levels of knowledge about this policy. Again, however, there were large differences across racial/ethnic groups (Figure 12), with Black respondents nearly 15 percentage points less likely than white respondents to answer correctly (p < 0.001). Those who took both surveys were 16 percentage points more likely in October than in September to know whether their state allows voters to return their ballot in a secure dropbox (p < 0.0001). 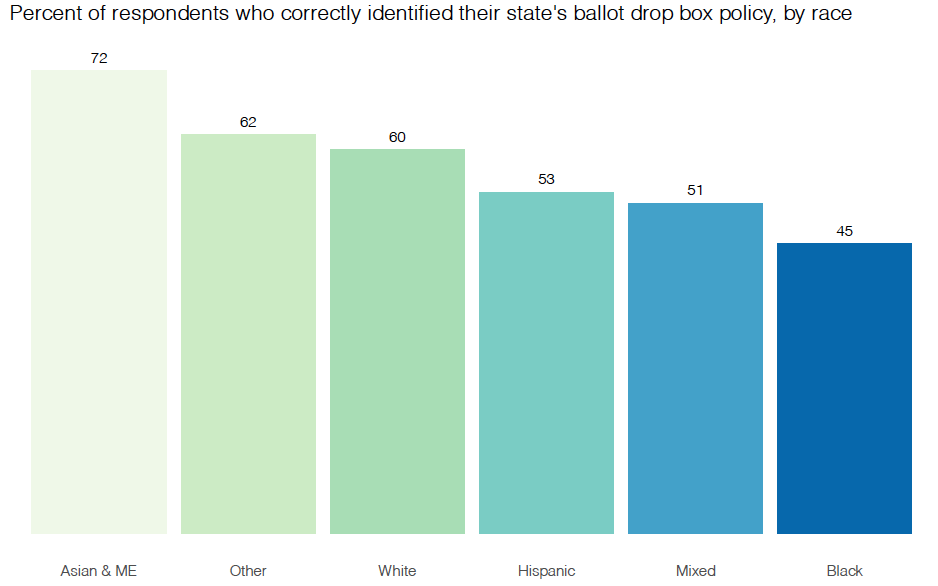 Survey respondents were next asked whether their state offers voters a way to track their ballot. Just under half of respondents (49%) correctly answered this question. Knowledge is largely consistent across age groups but varies significantly by race (Figure 13), with Hispanic respondents much less likely to answer correctly than whites, a 22 percentage-point difference (p < 0.01). AME respondents have especially high knowledge of state ballot-tracking policies, with 60% answering correctly.

That said, overall knowledge of state ballot tracking processes does appear to have improved over time. Those who took both waves of the survey are 23 percentage points more likely to correctly identify their state’s policy than they were in September (p < 0.0001). 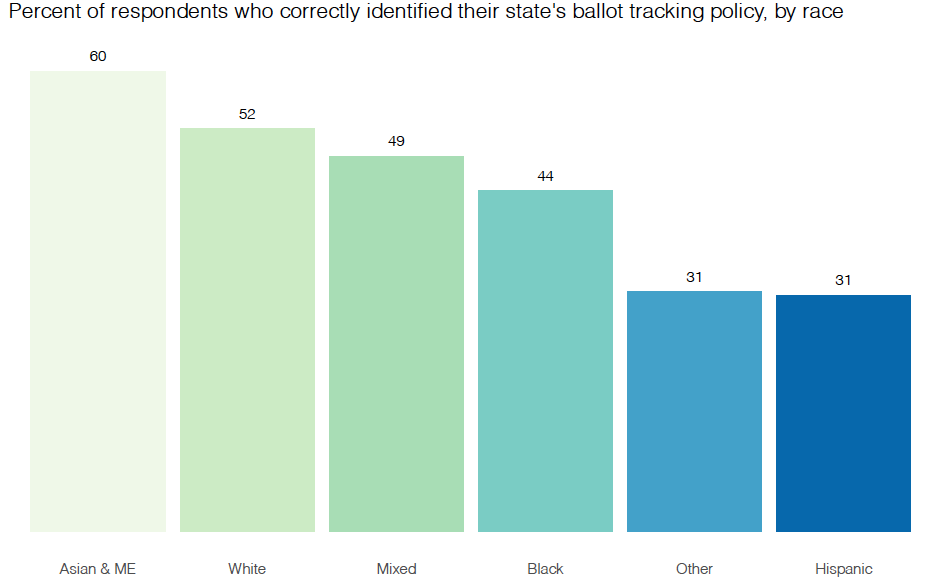 Easiness of voting by mail

Respondents were asked to rate the easiness or difficulty of voting by mail. The vast majority of respondents, 83%, rate mail voting as easy. Responses do not differ meaningfully by race—but there are major differences across age groups, with young people less likely than seniors to say mail voting is easy. 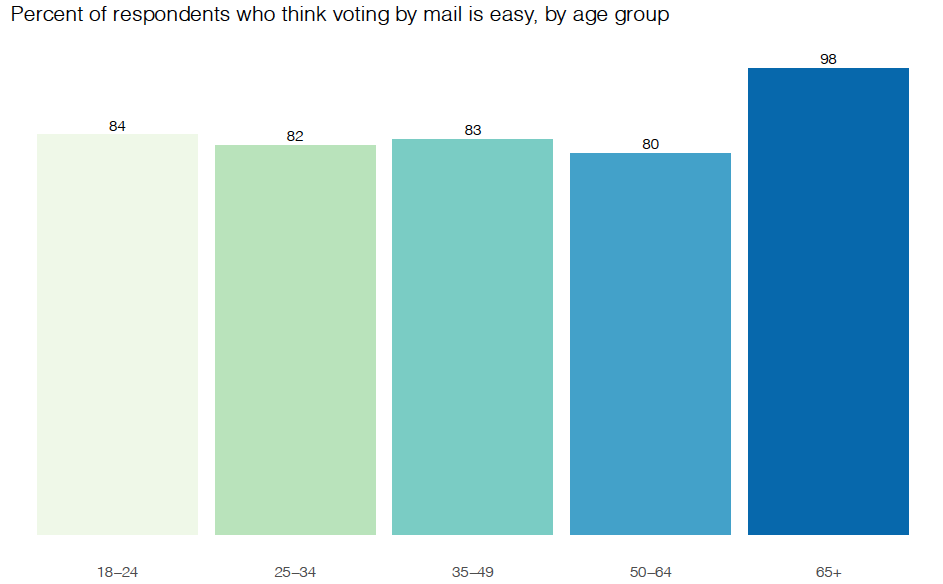 Social groups and voting by mail

Young people are around 6 percentage points more likely than older respondents to say they have at least some friends and family voting by mail, but this difference falls just short of statistical significance (p = 0.06).  Differences are larger across racial groups, as shown in Figure 15. Notably, Black respondents are 15 percentage points less likely than whites to have at least some friends voting by mail (p < 0.001). 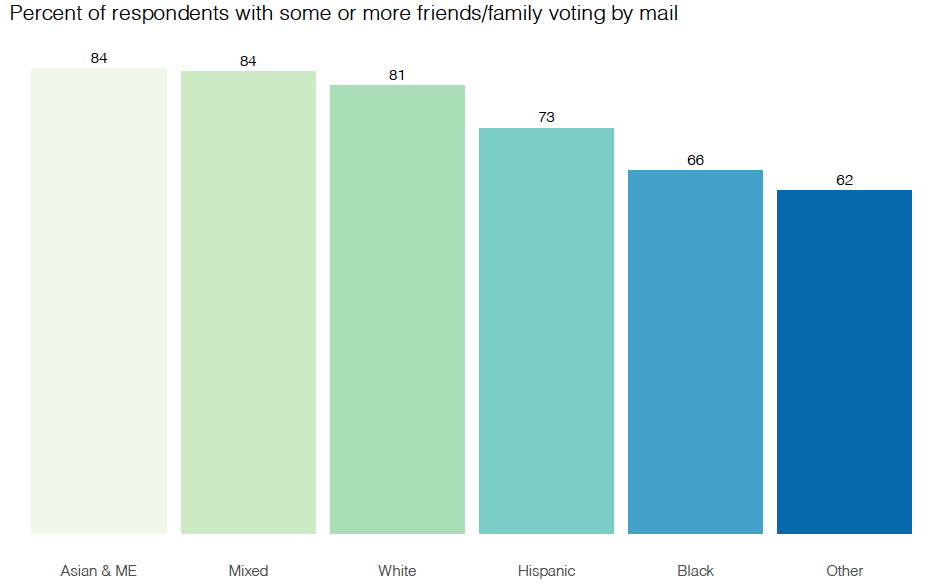 Confidence in mail vs. in-person votes

Respondents were next asked whether votes cast by mail would be counted fairly and accurately in the upcoming election. They were then asked the same question about votes cast at polling places. 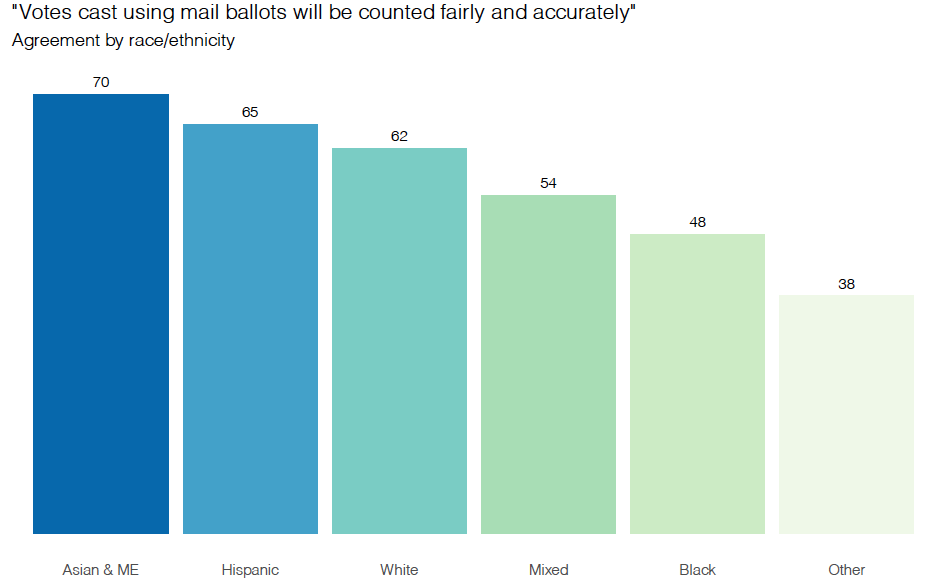 More than 4 in 5 respondents (81%) agree that votes cast at polling places will be counted fairly and accurately. Interestingly, younger respondents are more confident in the vote-counting process, as shown in Figure 17: survey-takers ages 18-24 are around 15 percentage points more likely than seniors to say that polling-place votes will be counted fairly and accurately. This difference is statistically significant (p < 0.05).

Turning to race, white respondents are also 20 percentage points more likely than Black respondents to say that polling-place votes will be counted fairly and accurately (Figure 18). This difference is highly statistically significant (p < 0.0001). Asian and Middle Eastern respondents, as well as those who identify as mixed-race, also express especially high confidence in votes cast at polling places. 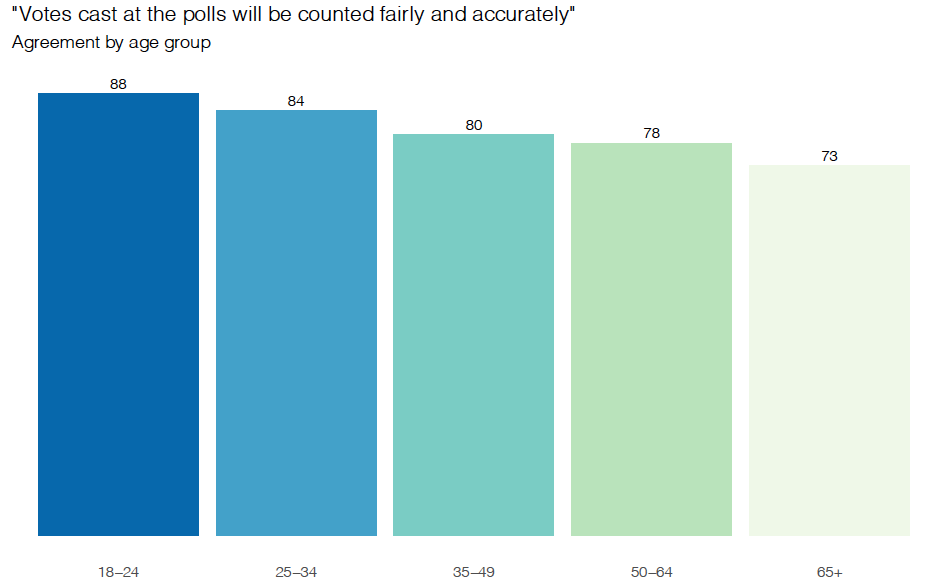 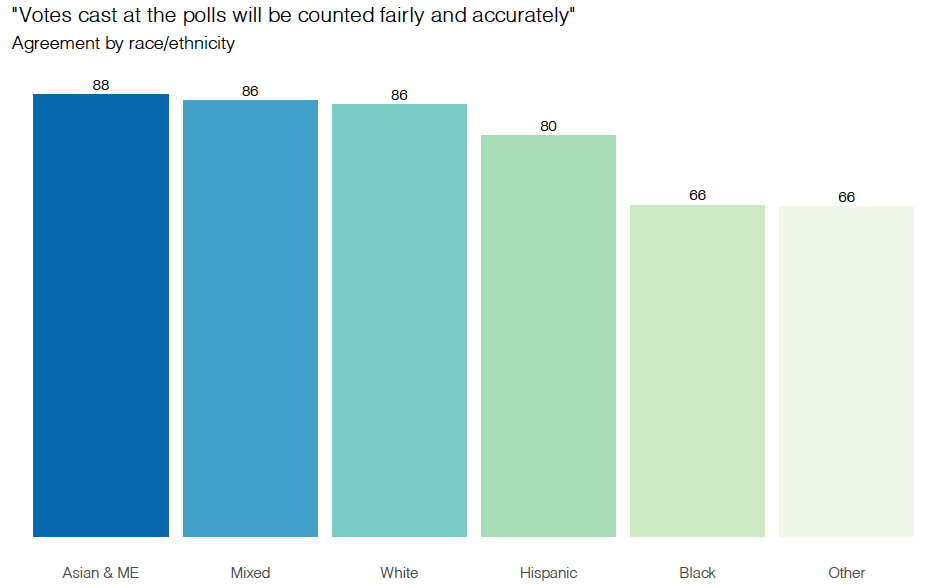 Finally, respondents were asked about their support for changing the rules around mail voting in all states.

Respondents were first asked about their support for expanding no-excuse absentee voting across the United States. Support is high across nearly all age groups (Figure 19), with more than 80% of almost every group supporting this policy change. The one exception is 50-64-year-olds, who are slightly less likely to support expanding no-excuse absentee voting. 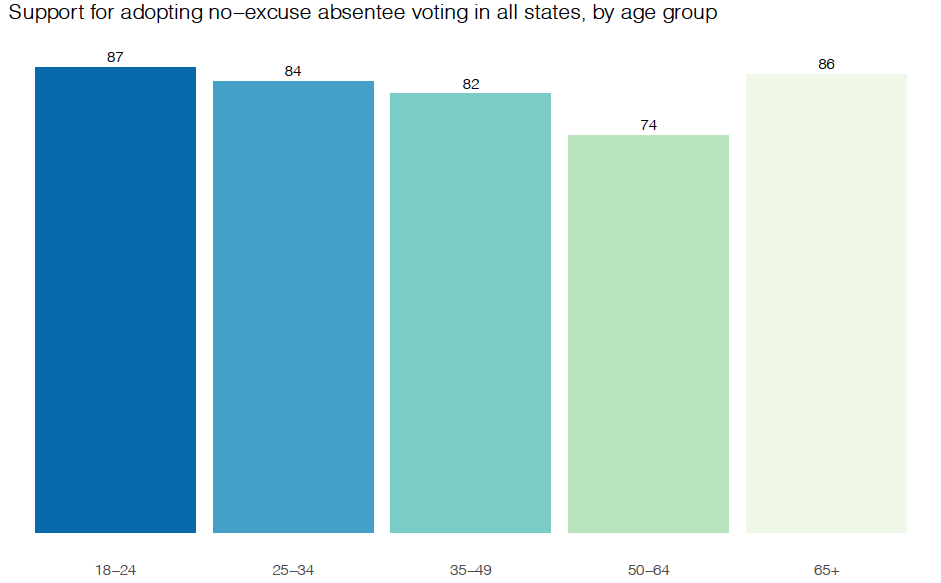 Support for expanding no-excuse absentee voting also varies by race (Figure 20). Asian and Middle Eastern, mixed-race, and white respondents are the most supportive, while Black and Hispanic respondents are slightly less so. Respondents who identify with other races express far lower support than any other group. 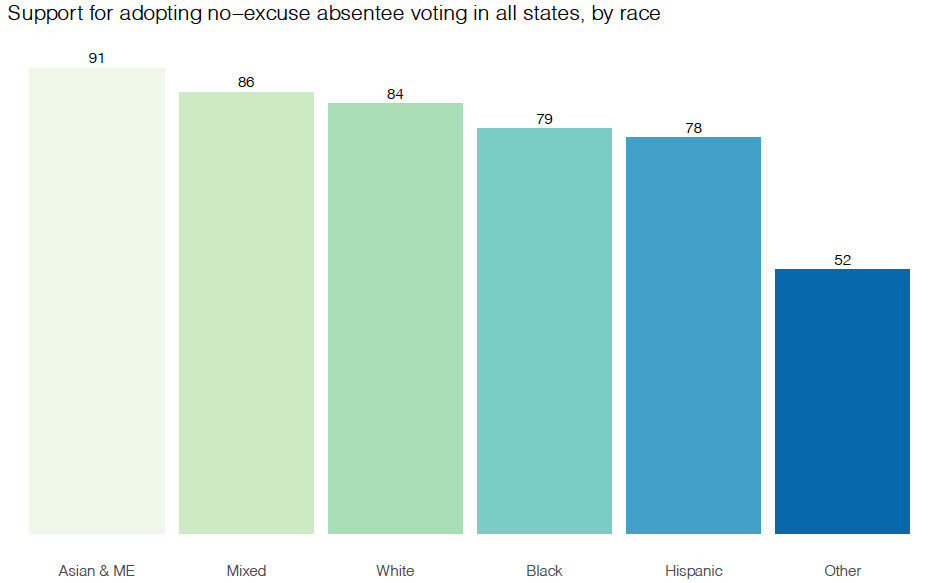 Respondents were next asked whether they support changing the rules so that all states automatically mail ballots to every registered voter. While levels of support are slightly lower, this policy proposal is still widely popular across all age groups (Figure 21), as well as most racial groups (Figure 22). 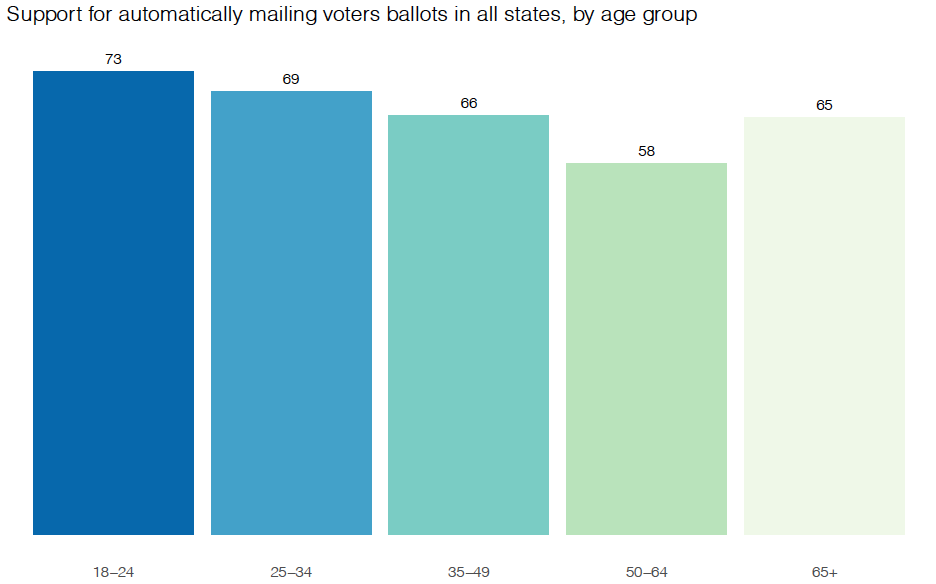 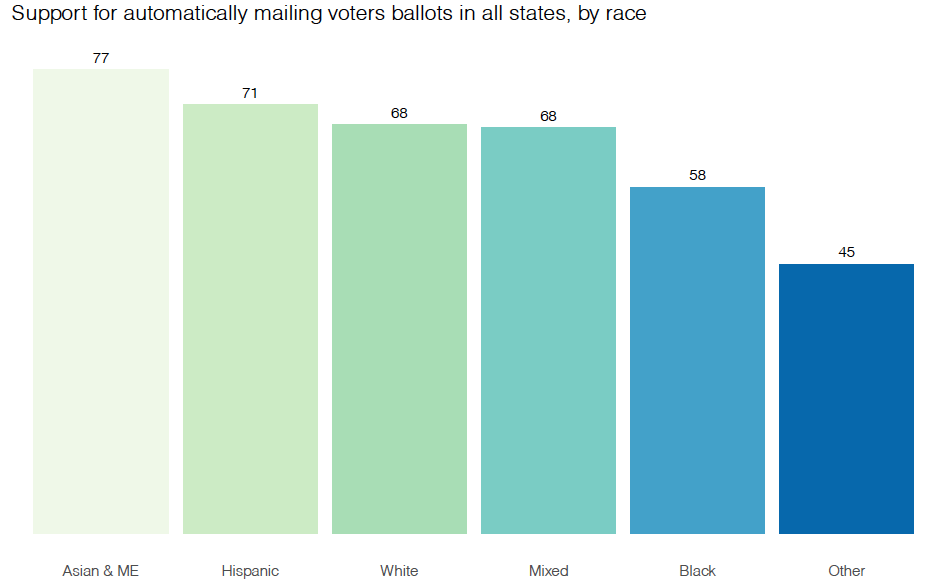